One of the most awarded and recognised fashion designers in the world, Belgian fashion designer Diane Von Furstenberg has influenced, not only fashion, but a long line of women no doubt inspired by her dynamic entrepreneurial image.  To this day she still has a huge influence in the world of fashion, being very recently the president of the Council of Fashion Designers of America, Inc (CFDA).  This organisation is a charitable council that supports the future fashion designers of America and helps them to progress and ultimately strengthen the impact that Americas fashion designers have on a global scale.  What an excellent choice of president Diane Von Furstenberg was!  Having the influence and recognition she has herself on a global scale through her endeavours and success in the fashion world. Her success has allowed her to influence and empower women, not just from the way they dress, but the way they are treated, the way they see themselves and the way they go on to make their own mark on the world.  As Diane Von Furstenberg Fashion Designer clearly stated “It’s not a formula for dressing, it’s a formula for living.”

For example, in 2010 Diane conceived and created the DVF awards to honour other such influential and inspirational women who have shown extraordinary commitment and determination in causes that promote and support the well-being of women around the globe.  These recognitions have meant they can continue making their mark as they are then awarded the resources to do so.  What a legacy.

Of her personal achievements and creations, Diane Furstenberg dresses are certainly the most well-known, as she invented the wrap dress that we see still making its way into the shops through the modern fashion design world. The wrap dress that Diane Von Furstenberg created was from a knitted jersey material that has the benefit of highlighting a woman’s shape by clinging to the contours of the body line while giving it an elegant shape and flow. One of these iconic dresses are now on display at the Costume Institute of the Metropolitan Museum of Art. This is not only because of the fact that this dress was pretty, elegant, and a fashion must-have, but because Diane Von Furstenberg clothing has held such an influence in the fashion industry and to women the world over.

Despite her passion and work in charitable organisations, Diane Von Furstenberg fashion is still in the making and being worn by such celebrities as Katie Perry, Michelle Obama, Kate Middleton Duchess of Cambridge, and Gwyneth Paltrow.  However, as she has had a career for 45 years as a fashion icon, and as a result, her vintage fashion patterns are in high demand.

To conclude, Belgian Fashion Designer Diane Von Furstenberg is an entrepreneur and a natural leader. Just after the design and launch of her wrap dress, that forever shaped her future endeavours, she was featured on the cover of Newsweek magazine, labelled as “the most marketable woman since Coco Chanel.” 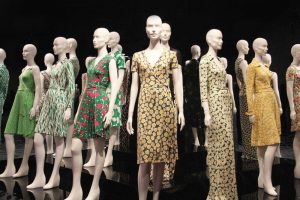